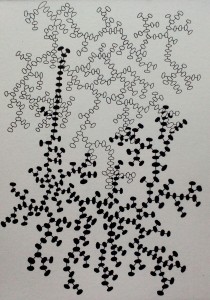 Even though I originally wasn’t trying to draw anything overly complicated, I still ended up spending more time drawing this than I anticipated. That being said, it feels nice to have a new finished drawing to post on the same day I started it. I think it might be a good idea to keep this up, for a little while at least. Maybe I’ve been working on too many epic projects that take more than a few days to finish. Massive projects can be awesome and rewarding, but it’s time to keep it simple for a few days or so.

As far as that web comic goes, I still have some ideas to fully flesh out. Actually, let’s not even call it a web comic. I’m not planning to make it resemble anything we’ve all seen a hundred times before. I kind of want to start by just making a single page with only a line of text or two. Trying to write about it right now, with the way I see it in my head, is kind of difficult, it turns out. I’m not really good at writing out my ideas anyways, that’s why I draw them, I guess.