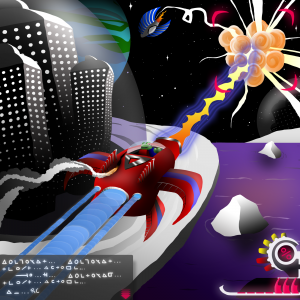 Okay, let’s try this again. See, this is my second time trying to post this today. Am I having internet issues again? Nope. It’s just that every time I look at this picture I notice something else I want to add or change. So, then I erase the version I uploaded, go back to Photoshop, and do what I have to do, then upload it again. Now here we are again, for the second time. This isn’t even including the fact that I already posted this picture yesterday and claimed that it was finalized. However, I also said in the very same post that I would like to go back to it and make a few changes.

I thought yesterday’s version looked really great. I believe I even said something like, “I can’t imagine this looking any better!” well, now we’re onto a new day in my creative habit project, and I’ve added all kinds of new features. Let’s list them, shall we?

1. The explosion looks quite a bit different. Not only in color, but also in the straightness of the explosion lines there. I think it looks way better, and you can feel where the strength of the blast is most prominent.

2. Ice bergs! That water there was looking pretty empty in the earlier version I posted yesterday. I think adding in those chunks of ice adds a bit of depth to the lake there.

3. I played an island there in the back. There’s also a second bubble city on top of it!

4. The smoke emanating from where the damage is located on the red ship is completely different. I feel it looks a lot more like smoke now. Not just a simple wavy line as before.

5. The buildings now have roofs! I’m not exactly sure why, but they just look a whole lot better than they did previously without the roofs. Just… more building-like, I guess.

6. It’s minor, but I added some snow banks around the main bubble city there. Also, I’ll throw in a few more of the minor changes right in number 6 here; We have the shine on the health ticks on the bottom right, as well as a little extra detail on the “next page” type icon on the text box there. I also made a few changes and additions to the overall shading of the red ship, and probably a few other places I’m forgetting. Oh yeah! and lots of new stars in the background.

7. Here I thought we were done, but nope! We have a proper pilot flying the red ship now.

I’m sure there are a few other things I’ve changed, I know there are. I just can’t think of them all, and it doesn’t really matter. It is what it is! I think it looks perfect. No more changes! Three days left until my 300th day in a row of drawing. Tomorrow I start something new, and it will likely be a nice and simple doodle on real paper. It’s been awhile. I think I’m due for a bit of a break from this epic stuff.