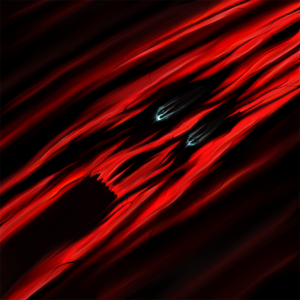 Most of the artwork I’ve uploaded and shared via my website has been roughly 2000 pixels by 2000 pixels, which probably wasn’t the best idea in the world. The larger the image, the longer it takes to load. So, I’ll keep my original versions on file, but from now on I think I’m going to continue to upload smaller variants of each piece of artwork I create. Lesson learned, I guess.

I actually got started on this red ghost thing late last night, but I spent a couple hours altering it and adding details this afternoon. The texture kind of has a tree trunk sort of look to it, don’t you think? But the eyes are my favorite. They’re pale blue and kind of look like little three pronged flames. There’s something irregular and strange about them.

I’m finding these last few months or so to be quite sluggish. Throughout the last year I’ve had plenty going on to keep me busy, and lots of exciting projects in the works. That hasn’t happened in awhile though. I mean, just to name a couple examples; there was the interview I gave for Crystal Moody, and the epic project I did for a friend of mine, Kathy. It’s likely because of the fact that it’s summer (and factor in some randomness, of course) that everything’s been pretty quiet as of late.

Of course, I have less than 30 days to go before this year long goal is complete. After which I’ll be jumping into a whole other world of projects and adventures, I’m sure. So this lull shouldn’t last too long. It’s just been a tad frustrating at times when my success as an artist feels like it’s at a bit of a stand-still (Better than a complete stand-still, I guess!). This shouldn’t last long, however, as I absolutely know that my success is based almost entirely on what decisions I make moving forward. I still feel in control of my future.

Also, I find that as things feel like their slowing down, I’m finding that I feel prideful in the smaller successes. Like getting some of my artwork retweeted via Twitter, or getting comments on Instagram. And today, when I felt some negative emotions creeping up I proceeded to do some research on how other artists deal with these problems. I discovered that most artists are asking the exact same questions, and feeling the exact same emotions. It helped a great deal to know that my story is a shared one.

I’ve said this many times on this blog over the past year, but sometimes I just need to remind myself that patience is key. Even if it takes me 10 or 15 years until I feel successful (whatever that feels like), I’m sticking with it. There’s a future version of myself that I want to grow into, and he will only exist if I do something – whatever that may be – every single day to help push me closer to my goal of becoming a successful artist. When I think of it that way, it feels a lot easier to continue doing exactly what I’ve been doing for almost a year now.