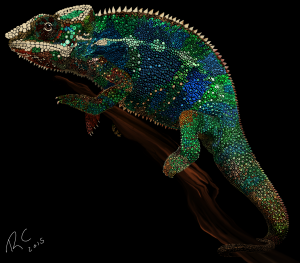 It’s finally finished! I’m not sure if this chameleon has been the most time consuming project I’ve ever worked on, but it’s certainly up there in the ranks. In the end though, it’s not only one of my favorite pieces of artwork that I’ve made, but also one where I learned a lot more than I thought I was going to when I first decided to start making it.

I’ve never been interested in drawing anything from the real world. Frankly, I just never thought I would be any good at it. Though I still feel that way, obviously there are some exceptions because this chameleon turned out surprisingly well. I feel that all that incredibly detailed 8-bit Nintendo artwork I worked on over the past month or so was a great build up to this guy. He’s basically made up of a whole bunch of tiny colored dots, not unlike those retro Nintendo games.

As for what I learned from this project, first and foremost is the fact that I feel way more confident in drawing something from real life based on just a photograph. I specifically picked this photograph because of how it was mostly made up of tiny dots. I was already able to visualize how I was able to going to approach this project, so that made it much easier to get started. If it was say, a picture of a wolf or something, I would have much more apprehension about whether I could pull it off.

On top of that, I’m much more confident in going a little crazy with the color scheme. Although the shape and basic design of this digital painting is based on a real life high-quality photograph of a chameleon, I went ahead and changed some patterns and took chances with a few changes that ended up working out perfectly. So all-in-all, the number one take away is that I gained confidence in a few different ways by finishing this project and getting the result I wanted.

I also learned a few things about chameleons! Their tongues are longer than their bodies (excluding the tail), and they see ultra-violet light 🙂