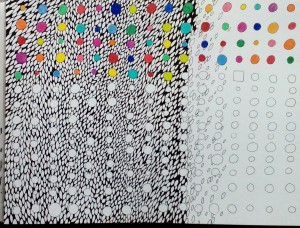 I love creating abstract artwork like the one I’ve been working on lately. It’s probably not the most exciting thing to show off day after day with these in-progress posts, but I really do like the idea of sharing exactly what I’m working on. No sugar coating or whatever. Not everyday is about working on exciting new projects, rather more likely they’re about the hours spent trying to finish existing projects. Which I know from my own experience can be an interesting thing to keep up with as a fan of other artists myself.

With the PS4 game The Witcher 3: Wild Hunt coming out in about a months time, I’ll be doing some related artwork of some kind for that game’s release. The game is incredibly realistic graphically though, so I’m not quite sure what I’ll be drawing exactly, but it might be related to the creatures in the world rather than the environments.

Speaking of drawing environments, what I’m really excited about is another PS4 game called No Man’s Sky. I’ve written about the game before, but I can’t talk about it enough. I think I’m beyond excited to play it. It’s going to be a pretty big deal when it’s finally released, hopefully later this year. It could possibly get pushed into 2016, and I guess that would be alright with me. If the developers over there at Hello Games need more time with the game, then there’s not much else to do besides delay it. I’m hoping we’ll hear more about the game in June.

When I finally get my hands on the game, I plan to go crazy taking screenshots and drawing as many of the game’s environments as I can. There’s even a chance that if I jump on it early I could potentially get some traffic in from No Man’s Sky fans. The game looks incredibly artistic, and so it’s a perfect fit to chronicle my adventures in the game and post about it here.

I want to get really good at drawing nature and scenery, and since No Man’s Sky’s scenery is so exotic and filled with color, sci-fi tech, and alien life, it should be a lot of fun. Who knows, I had a copy of Minecraft about a year before the insane popularity of that game took off. If I had of been passionate about Minecraft like I am with No Man’s Sky, and created content related to Minecraft back before everyone else did… well I’m sure the timing would of been nice.