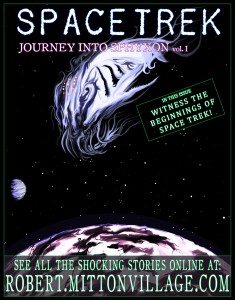 I’m a little bit disappointed right now! Don’t misunderstand, I think the picture I did today is the absolute best thing I’ve ever created. However, it’s so good in fact, that I’m totally disappointed that this isn’t a real comic that I can flip through. I made something that is completely badass, and not even a real thing. It’s a strange and new feeling.

I’m not even quite sure what the plot of this comic-book would be. I mean, Space Trek? You’d assume you would be travelling through space in a “spaceship” of some sort. I think if this was a completely real comic book, then it would traditionally feature either some of the main characters (if not all of them) looking skyward all important-like, or the spaceship they use for the entire series, on the cover of the first issue. Unless, which is the case for this “fake” old-timey comic series, your ship is a organic space whale. I think the first volume of this series would be mostly about a giant space creature revealing itself to us and the panic that would follow here on Earth. A more sinister force would then show up, also from deep space, and the original space creature would actually help defend Earth. Only then would you meet the would-be heroes of the story as they assist. That would probably work.

So, I definitely don’t plan to top this image for tomorrow’s work. I’ll probably take it easy and keep it simple. So, now’s the time when I ask the readers out there; got any suggestions for themes, colors, etc. for tomorrow? Thanks for checking this out. Don’t forget to share on the Facebooks! I really appreciate it. Take care!