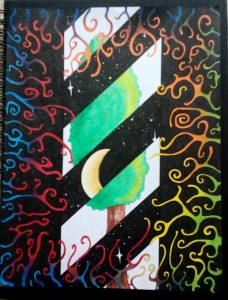 Almost finished! As I suspected, I only had a little bit of time to do my creative habit. That trunk looks pretty amazing, I think. I don’t want to add anymore detail to it for fear of messing it up. Right now, it’s looking pretty great. I’ve also completely finished the outside tendrils. The last couple didn’t turn out the way I was hoping, but all the colors blend pretty well.

I still have a few more details to add to the leafy part of the tree because I’m noticing that it could use a little more dimension to help it stand out. I’m hoping that I can pull that off properly. Then all there is left to do is color in the sky with a light blue, maybe add some clouds, and perhaps a grassy hill towards the bottom. Then I’ll move on to something new! Finally, eh?

So, I had a buddy over today and we watched the original Star Wars. No, not A New Hope. Star Wars. I downloaded an original edit from…. somewhere, and it still looks fantastic. There were only maybe one or two moments where you kind of noticed some special effect issues, but they in no way took me out of the movie at all. It was fantastic as I’ve never really watched that version. Not since I was very young anyways and I was more occupied by video games than most movies. Except maybe the Teenage Mutant Ninja Turtles movies.

The Star Wars we watched didn’t have any of Lucas’ famous edits. No little yellow droid being replaced by a giant dinosaur, the special effects were all original (you know, made with hard work and dedication), and Greedo was killed before he even knew what happened. I’m not a huge Star Wars fan. I just didn’t grow up with it. But I really love this version of the movie, so much more than what I’ve been watching every few years when I go back and do the Star Wars rewatch.

I figured since a new Star Wars film is coming this year, it was time to go back and watch the original movies. I’m so happy that I found widescreen versions of the very first three Star Wars films. Being a creative person myself, I can really appreciate what Lucas was able to create. I don’t think there’s anything I can say about Star Wars that hasn’t been said repeatedly by many a Star Wars fan previously, so I’ll just say that I’m not a fan of the remastered versions with all the changes, and watching this version really made me appreciate how hard it must of been to build everything in that universe. Or galaxy, as it were.