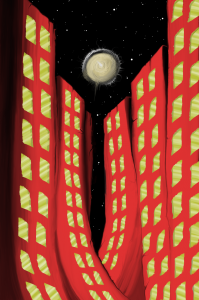 I’m still working on this painting! For today I added some much needed detail to those windows. Even though I was originally going for an abstract feel, I’m attempting to make those windows a little more window-like, rather than just blobs of paint. So far, they’re turning out well. Ignore the fact that right now the windows are reflecting a decent amount of light even though the scene is during the night. What I’m thinking of doing is trying to find a way to make the object in the sky emit some light. Like you would expect a proper alien anomaly to produce. That’s the idea right now anyways.

I’ve also added some detail to the buildings there. It actually took a couple hours to do all that I did today, even though the results don’t look a whole lot different from the day before. Well, I just went and looked and I guess the differences are significant enough. Doing each one of those windows by hand took forever. By the time I was on to the last building, I was really forcing myself to take my time and make sure I did a good enough job, because I was really sick and tired of doing the windows at that point!

So next up is making that object in the sky brighter! I’ll perhaps even make it look completely different, because right now I’m not too sure if I’m committed to how it looks right now. What do you think? Change it up? It shouldn’t be a massive change, but I want it to be a bit more obvious when someone looks at this painting for the first time, what the heck that thing is! Right now, it’s pretty ambiguous, I think. I love the idea of a mysterious object in the sky, but I want it to feel like a big ball of energy that could perhaps be an alien spaceship. That’s the feeling I want to get across.