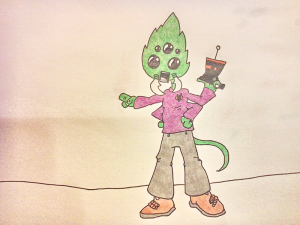 Jesse: “They ran that way! Let’s murder their faces!”

This is Jesse. Jesse is a space alien in a Star Trek uniform. I love this guy so much. I was terrified as I was making him as I did it all in pen first. So I didn’t use any pencil at all this time. The pens I have just don’t ink over pencil well at all. Despite that, this guy turned out terrific. I mean, there are a few niggles I have with some things; the gun, the pincers on his face, and his eyes. But hey, he’s awesome! Welcome to the world, Jesse.

I’m tempted to draw this guy some more. Making a few changes here and there until he’s perfect. Exactly the way I want him to look. Though I usually don’t end up going back to previous projects in the end.

Speaking of going back to old projects. I still want to digitize that demon looking thing from yesterday. I didn’t feel like drawing on my computer today though. And I guess because of that things turned out awesomer. Awesomer!