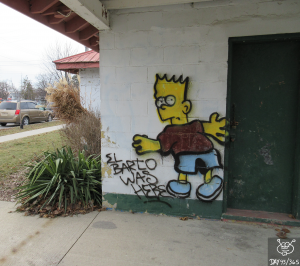 I found a Bart Simpson while I was out adventuring today. It’s not really the best rendition of the character, but I can tell they put the effort in. I just imagine a couple backwards hat wearing, baggy jean’d, 30 somethings…

“Hey, you said you had some spray paint?”

Anyways, I didn’t want to photograph anything overly complicated or even all that artistic (as far as my shot is concerned) today, because I don’t want to feel any pressure to keep over performing with each photograph day after day. I did actually take some pretty awesome photos today, but there were things about them that I didn’t like.

This one here, for example; I like the chain link blur effect, but the focus of the shot is pretty much that garbage can. Nothing interesting is really happening behind this fence here. So I’ll use that fence effect for another shot some other time. Then, I also took some pictures of some trees, and they look way better than the ones I’ve taken previously, but I’ve still taken lots of tree shots this year, and I feel like I don’t need to do that as often as I did before.

I’m sure I’ll be posting more photos and artsy stuff throughout the week. Probably more today, even! Keep an eye on my Twitter and Instagram 🙂