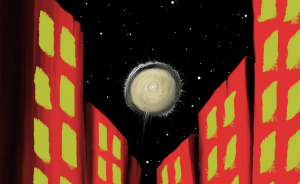 Today felt like a super productive day as I only painted for an hour or so, but it felt like a got a lot done overall. Usually I sit down to draw and spend an hour or two figuring out what I’m going to do, and then fail for a couple hours until I get a better idea. Today though, I found a comfortable way to use my drawing tablet and my laptop and still accurately paint with it. Usually I struggle, even after using these tools for a couple years now, with finding a proper way to sit comfortably and still use the tablet with any accuracy.

I had a brief conversation with another artist recently about using drawing tablets. He didn’t use them because he felt they were inaccurate, and so it takes a lot longer to draw basic shapes, for example, that look as good as if you were drawing them on paper. I didn’t disagree when we had the conversation, but I’m unsure how I feel right now, because everything went really smoothly for me. Oftentimes it does take a bit for your brain to adjust to looking at a computer monitor while you draw, rather than looking down to where you’re drawing on the tablet with the pen. Today I was situated on my reclining chair where I had the laptop screen and keyboard within reach, my Wacom tablet on my laptop, and I was able to shift around in my seat a bit so I don’t get uncomfortable or get any cramps from being so steady.

What I’m discovering lately though, is that if I draw out my ideas using pencils, pens, and real paper, then take a photograph and trace over it using Photoshop and my tablet, I seem to have a much easier time jumping into the painting part of the process. You know, mostly broad strokes. I did that yesterday, and so I’m pleasantly surprised that today, when I began to recreate some of the smaller objects and details in the picture, I had no problems at all. In a short amount of time I was able to add some interesting effects to the moon there. Not to mention make the buildings look a bit more deteriorated. It’s really noticeable in the zoomed in version where you can see the effects best. So that’s what I posted today, the zoomed in version. You should still full-screen the image if you want to see the details properly.

I’m not entirely sure if it’s a moon, a natural “event”, a spaceship, or all three! I kind of let the paint brushes steer the ship, and just add or remove color as I see fit. Depending on what kind of emotions the brush types and colors bring out in me. Seriously, I think almost everything I’ve ever created is done that way. Think of all my pictures as an abstract piece. I start with some basic ideas (or sometimes none at all!) and every single time it ends up being completely different from where I started. So for this moon-like object, it was a pale yellow/gray, and when I started using the fine tipped brushes, I wanted to make the swirling tendrils feel like something you might see on a telescope picture of our Sun. However, red sends out the feeling of anger/rage or impatience/speed (just me?), and so since it was that pale yellow/gray, throughout the process of detailing I felt a calmness. I don’t get a fully nefarious feeling from it. There’s certainly a questionable feeling about it though.

So for this object in the sky, it originally was a simple moon. If you remember, or look back at previous posts, I had three “wave” type shapes around the moon. When I began to remove the black outlines around them (as I did with the buildings today as well), which was left over from the pen drawing I started with, I began to notice some odd blurring effects that I thought looked pretty cool. Then I couldn’t resist adding some tendrils (lol always with the tendrils, eh?) and things just kind of evolved from there.

Anyways, I could go on forever about the process. I’m sure someone out there finds it interesting. Personally, I like writing about it because I never stop to think about my own process, and sometimes it’s important to do that. I can’t even imagine how many times I’ve subconsciously figured out a fantastic process to create some cool effect during an art session, and never think about it ever again.