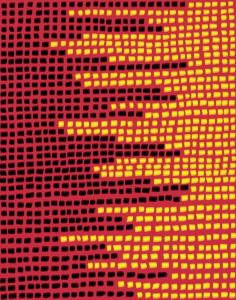 I want today’s picture to be the start of something important, something I look back on and notice a positive trend towards a series of similar drawings. I mentioned a long while ago that I wanted to do some digital paintings inspired by old-school pixel art, and I think this is how I’m going to do it. I just take a particular Photoshop paint brush and just paint each pixel out. However, despite today’s picture already taking about an hour or so to make, it should take quite a lot longer to fill out a full video game screen with a visible image that you should clearly see when viewed in full.

I’m pretty sure I’m going to do Nintendo title screens to start. The NES is a system that I have a lot of important memories attached to, and so I really want to start with something like Star Tropics or Blaster Master, I think. I just hope that I can do them justice!

First off, on the positive side of things, as I’m going along creating the thing, I would love to look up in my Photoshop preview section (where I can see the entire image as a thumbnail) and start seeing it come to life. I think that would be a pretty awesome feeling.

On the other side of things, what if I put all that work in and it just doesn’t look right? I mean, to be honest, I’m not all that worried about that because if it doesn’t look right, then I’ll just move on to do something else, or figure out a better way to do it. So either way it should prove to be a pretty fun experience. I’ll just stay positive and hope it turns out.

It’ll also be nice to just get that idea out of my head, because I’ve literally been thinking about doing something with retro gaming title screens since around when I started my year of creative habits. I’m not sure if I’m the only artist like this out there, but when I get an idea it usually sits in my head forever until I get it out. I’ve had ideas sit in my head for years until I did something about it.

I’m not sure how I’m going to get started on this project, because I need to figure out a way to plan it out to avoid making mistakes. I wouldn’t want to get going on a line of pixels, and an hour later realize that I missed a line. Though, since I’m using Photoshop to do this, it wouldn’t be too hard to get it fixed by just moving some lines around. Even so, I have to go at this with a solid plan.

I’m also not exactly sure when I’m going to start this project, because I don’t think I’m even done with today’s digital painting yet. I had some other ideas for features to add to it, but ultimately I decided it was best to get what I had so far posted before it got too late in the evening. Hockey Night in Canada shortly! Go Leafs Go!