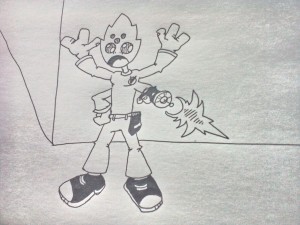 I quickly drew Jesse again today, with a few changes, as I have to leave shortly for the day/night. I was afraid of not getting my drawing done for today, so at least I posted something by drawing this guy. However, despite being in a hurry, he still turned out marvelously. Don’t you think? I wish I had of made the hand holding the gun a lot bigger. As it’s supposed to be closer to the camera. however, I did this all in pen and once I drew what was there, there was no going back. Also, it makes sense he has such big feet as his hands are pretty massive Ninja Turtle-esque paws.

Maybe tomorrow I’ll color him up as my daily duties. But I did find some retro video game screens to use for my next big project. However, after staring at them for awhile, I can’t figure out exactly what I want to do with them! I don’t want to just simply recreate them. If I did that with Photoshop then it would just look the same. Like I just found a picture of the title screen and uploaded it as my work. So, I could maybe recreate them on paper. But there’s nothing really creative about that. So, I’ll have to figure something out. Something awesome.