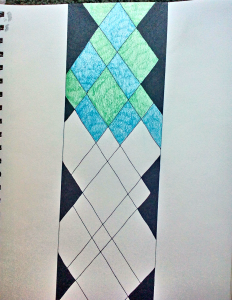 I’m still having a blast with all this abstract stuff. This style is always a lot of fun as the image changes more than a few times as you draw. You start trying out different ideas and color schemes as you’re drawing. I plan to fill this book entirely with these types of images. It will hopefully turn out pretty great.

Growing up I hardly used any color with my drawings. About 95% of the time it was strictly pencil or pen. Combined with a lot of shading. Now, it’s really refreshing to be able to just throw color around however I want. It’s like with today’s picture, it’s really simple right now as I’ve only spent a couple hours with it, but once I get shading and adding some details, I’m sure it’ll look quite different. Not sure where I’m going with it yet though.

I really should get into Halloween mode sooner than later. It’s coming up fast. I’d like to draw some of my classic creatures that I used to draw all the time. You know, monsters and aliens. So I’ll have to start that soon.

I’ve been discussing a movie marathon with a couple friends of mine. Maybe doing it right on Halloween if people aren’t too busy. Probably a few classic horror movies with some funny Halloween movies thrown in there. We’ll see what we decide on.

My question for today is definitely Halloween themed. Out of the classic scary movies, which one is your favorite? Any movie with a thriller or horror theme is fine. Or even a proper Halloween theme. You know, stuff like Friday the 13th, Nightmare on Elm Street, Nightmare Before Christmas (Yup. I would include that for sure), Aliens, and The Exorcist. Stuff like that. For me it’s definitely Beetlejuice. I was never a horror fan growing up. Watched a lot of them, but never really got much out of it. Beetlejuice however, stuck with me. I even had a whole bunch of action figures. So what’s your favorite?