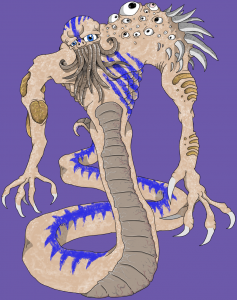 Tattoos! That’s what this guy was missing. It makes him a little more intimidating, and gives him a new feature that detracts from all that bare skin. While he does look just fine as he is, I still feel like there’s more I can do. It would be really nice if I could figure out a way to remove his black outline, but it doesn’t look proper when I simply remove it. I’ll look into that more tomorrow. Yup, at least one more day with this guy, I think! He deserves all the detail I can add.

Alright, what else did I do today… Those horns! I think they look pretty cool. They definitely needed some kind of texture. Now they have an added dimension, which they sorely needed. The only other thing I can think of that’s new with today’s version is more skin detail all over. I think mostly on the rest of the lower body. I left that unfinished yesterday.

Lastly, I created a Facebook fan page for my artwork (which can be found here). I’ve been meaning to do it for awhile now. I just didn’t think it would be a big deal, so I put it off. Boy, was I wrong. Where the heck are all these people coming from?! I have so many friends and family pushing so hard for me to get as many likes as possible. I think almost 10 people shared my page between last night and today. That’s ridiculous, guys! I have over 50 likes. Do you realize how much pressure that puts me under? 😉 Seriously though, you guys are all rock and stuff. Thank you so much.