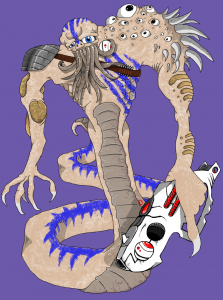 Alright! Here we go. I think he’s all finished. I say “I think” because I’m already finding new things to add/change just looking him over right now. However, I will at least take a break from Ralph for a little while. A few days or so maybe, If not forever. With my new Facebook fan page going strong (70 followers right now!) I really need to move on to something new for a little while so everyone following stays interested. I think that’s a good idea.

Well, let’s get to what’s new for today; I finished up the alien looking gun he’s holding, added a shadow for the gun across his body, and tried my best to replicate the skin detail on the new hand that’s holding the cannon.

So first and foremost, I think the detail I added on the gun is pretty fantastic. It was touch and go for awhile as I was trying to fill in as much of the empty white space as possible and some of the early ideas I had just didn’t look right. Then there was a problem with how the gun was standing out from the rest of the picture. Actually, it still does! Though nowhere near as bad as it once did. When I really think about it, the gun would stand out anyways as it’s not organic like most of the image. I think the gun pops off the “page” because of that, and because it’s so very white. So it stands out because of normal reasons, I think.

Secondly, I created the skin pattern on the hand holding the gun. I used a textured brush with some specific settings for the skin pattern days ago and it was actually difficult to find exactly what I did. I spent some time looking through the different painting layers and found enough details, colors, and settings to replicate it decent enough to not draw too much attention to that hand. So unless otherwise informed, I don’t think it’s that noticeable. I just informed you though, didn’t I?

Next up is the shadow on the body. This was the very last thing I added and might of even been forgotten if it wasn’t for the actual gun standing out as it does. I needed something to blend it in with the rest of the picture. Then I realized it should give off a shadow on his body, and that small detail is one of my favorite elements in the entire drawing. Seriously.

Well, that’s it! That’s Ralph. I created a guy mutant thing named Ralph. I think he’s pretty cool and I actually hope I’m not completely finished with him as I can already tell that I’ll miss working on him.