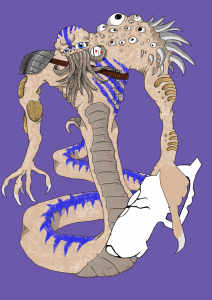 Remember when you kind of felt sorry for this guy? I mean, the poor guy was injected with alien DNA and always had those gentle blue eyes. Now Ralph’s bringing some fight back to the real monsters that did this to him! The gun isn’t finished yet, neither is the hand that’s holding the weapon, but I’m still satisfied with how today’s progress went.

I got to working on this pretty late today as I’ve felt tired and a little bit miserable for most of the day. I sat down at my computer to draw, a little bit frustrated, turned on some tunes, and added those little bullets on his leather strap there. Once finished, I realized bullets were a stupid idea as I was thinking of giving him a big hammer or something. So I googled some modern real life rifles and couldn’t find anything that looked good. Or even anything that might spark an interesting idea. So I then tried alien weaponry and found a whole lot of interesting cannon designs. I decided to take a few ideas from a couple of those pictures and create my own. Even without detail, his gun looks pretty badass, if I do say so myself.

I’ve also added an explosive that’s held in his tentacle there. I’m pretty satisfied with the design of the bomb, however I’m not 100% sure everyone else will know what it is right away. I’m thinking of added two slots in his weapon that would holster these bombs. With one being empty as if he just removed the explosive. Having them housed in his alien cannon might help signify that they are indeed weapons.