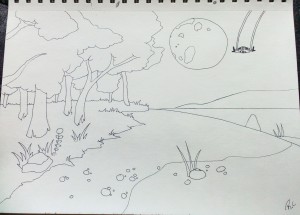 Toady I continue with my No Man’s Sky drawings. This one shows a first person view of an alien beach with another planet looming overhead. I’ll no doubt color this for tomorrow’s artwork. Which should prove to be quite fun. I love knowing what work is ahead because then I don’t have to wrack my brains trying to figure out what to do next. It’s already planned out. Good stuff. 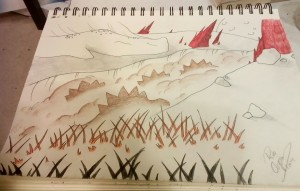 My new Playstation 4 is quite the distraction. I should of been more prepared. It’s 11:35pm right now and I’m just doing my daily post right now. Ridiculous! I should absolutely put more effort into doing at least the drawing bits earlier in the day. I mean, I was up late last night with it being New Years Eve and all. Therefore, I slept a bit of the day away today. Even so, I need to take this project a bit more seriously before I completely miss a day due to distractions and forgetfulness.

I can’t remember how much I explained about this picture when I made my post yesterday, but I’m going to go ahead and explain a couple things about this picture. First off, it’s a drawing of a planet shown off in an early game demo. The game is called No Man’s Sky and I’m super excited about it. Like, to a ridiculous level. It’s a sci-fi game that procedurally generates planets, plant and animal life, and technology in the form of space stations and good old space ships. In fact, there’s supposed to be so many star systems and locations that it would be literally impossible to visit all of them in a life time. The main thing I’m interested in is going to some gorgeous planets and taking pictures of it’s diverse wildlife and locations, and then doing some artwork using those photos.

Drawing planets and wildlife that no other player has ever set foot upon is pretty mind blowing. I can’t think of a better way to explain how excited I am about this. It’s pretty much the main reason why I wanted to pick up a Playstation 4 sooner than later. Now that I have one, I’ll just have to sit patiently until the game is released, which is apparently sometime in 2015.