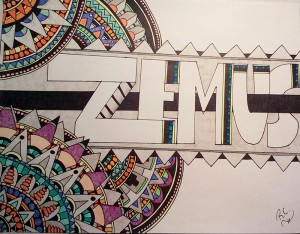 This sure took a lot of time and effort to do, but I’m so happy it turned out well. I gave myself some blisters from all that heavy pencil coloring! It’s funny though, I know this has happened plenty of times on previous posts, but when I sit here and type out my immediate thoughts, I stare at the uploaded image of what I drew that day. I look over it and can see all kinds of things that bother me. They could be things that are permanently engraved onto the page and there just isn’t a way to fix it, or other times (which is the case today) it’s something that I missed. Looking at this design and the coloring I did today, I really wish I added some shadows. I think it could really add some awesome dimension to the image overall.

You know what? I’ll be right back. Well, not that it’ll matter when you read this, as you’ll be reading it all in order and the passage of time is impossible to put into text. Well, I guess not impossible… 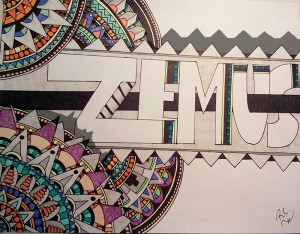 There, now I feel much better. The shadow isn’t perfect, but it’s there, that’s what matters. It looks proper now. Well, to my eyes anyways. I just drew in some dark areas with a regular brush with a little transparency using Photoshop. I was originally going to use the colored pencils but it was taking awhile to figure out and if I started to color it in, it’s permanent. So I thought it would be faster, easier, and likely look better, if I just used Photoshop. Seems to be the way to do everything nowadays. Technology, eh? Oh, and I edited one or two tiny little things in the picture that bugged me. I’m sure you can spot the differences. Maybe? I think there’s two, besides the shadows obviously.

So, I didn’t plan to talk about anything special really. Just wanted to get my post up and talk about what I was trying to accomplish. However, I watched this 2 hour podcast last night and I just want to say a few things about it and what it made me realize. First off, here’s the link to the show. It’s on a new channel called Kinda Funny (Twitch for Kinda Funny Games, and Youtube for Kinda Funny). Click the links there and check ’em out!

One of their podcasts featured Kevin Smith recently. I’ve only seen part 1 as part 2 is going up on Kevin Smith’s own podcast called Smodcast later this week. Anyways, so this show made me feel really secure in the decisions I’ve made over the past few years. Especially with this website and everything I’ve created since starting it. This group of friends, the guys interviewing Kevin Smith, just recently quit their jobs and started an online entertainment channel called Kinda Funny. Now they make videos everyday of themselves answering questions about the entertainment industry, play video games with fans, and just mess around. They had a huge following before this so they instantly hit 100,000 subscribers on Youtube  on the first couple days. Safe to say they’ll do fine for themselves in at least the short term.

However, it’s Kevin Smith that does most of the talking here and just about everything he says just made me feel good about myself.  We live in a wonderful time when you really can do whatever makes you happy and get paid to do it. As long as you recognize the consequences of the choices you make and follow through with your goals, you can achieve whatever it is you want. I don’t feel I’m especially good at this whole writing words thing, so I’ll just finish by saying that they really make some wonderful points about going off on your own and trying to do something uniquely you. Kevin Smith puts it wonderfully talking about “The business of being you. I get paid for being Kevin Smith.” paraphrasing here, but yeah, go check it out! I’ll throw the link right here.

Alright, so if you checked out the video, what did you think? Even if you didn’t, what do you think about following your dreams, doing whatever it is that makes you happy, making a business around yourself as an individual? What about the crazy idea of getting paid while still doing something you enjoy? Let me know in the comments!