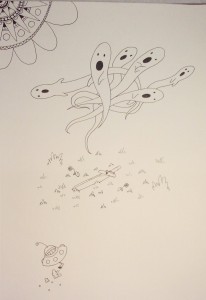 Well, on one hand this was a very unproductive day, while on the other I learned a bit about myself and my creative process. My package of new art supplies arrived today, and after unpacking everything and getting setup to draw, nothing happened. I stared at a blank page of this new high quality paper and… nothing happened. I had all these new fancy colored pencils to work with, my HB pencil was all sharpened and ready to go, and I had an awesome pen selection with these new Micron pens. I just didn’t know what to do with them. Nothing felt worthy enough to try.

This isn’t the first time I’ve had trouble getting started on something. I do remember pretty early on in my creative habit project that I had something similar happen to me. A blank page can be extremely intimidating, and I was feeling this ten fold today because I was using all new supplies. I don’t think I felt like I could do anything worthy of this nice expensive paper, or use up any of the ink in these new pens, etc. I didn’t realize any of this at the time though, and instead I was just stressing myself out by trying to come up with a way to approach this strange situation.

A short time later I got a message that I had company coming over, and so I decided to put things away and slowly work on it little by little as the evening went on. I didn’t touch my new colored pencils or paper, and instead I went back to my old sketchbook. I decided to ease my way into using the new stuff by starting off by trying out one of my new pens. This way I don’t really feel as bad about wasting the new stuff on some little doodles. I had no time, nor the concentration, to pull off anything epic tonight. So I kept things pretty simple by just trying out these pens. The detail I’m able to do now is pretty insane. I made a teeny tiny smiley face with one of the Micron pens. You actually had to squint to see it properly.

Sometimes I find I put too much pressure on myself to keep drawing consistently epic projects. I write about this once every other week it seems. I need to keep reminding myself to take it easy, and although over the last several days I’ve been forced to take it pretty easy due to the lack of art supplies, this time the situation is a bit different. I know I don’t ‘really’ need to explain myself to anyone, especially to any of the creative people out there. They get it. Sometimes you have it in you to do something awesome, and sometimes you don’t. I guess what I’m trying to say is that I felt uncomfortable with all this new stuff today. I’ll get used to it in time, or have some amazing idea that I’ll want to put to paper. Eventually, I’m sure. For now though, I want to enjoy the new tools and just test some of them out. Today was about messing around with the pens.

I’m not sure how I’ll feel when tomorrow comes (this post is already really late as it’s 11pm!) but I am excited to really get working on something cool down the road. My buddy, Brad, the company I had over today, actually helped me get some neat ideas together for a project I might start working on soon (Dagobah!). So we’ll see how that goes!

So, my first day with my new toys didn’t go so great. The day itself was great, but as far as building upon my creative habit, not a lot really happened. Today’s drawing is a pretty good indication of that. But that’s okay! I learned that I need to carefully feel my way around when it comes to trying something new. Sometimes it’s productive to just jump in head first, but carefully dipping your toe in is occasionally the answer too.