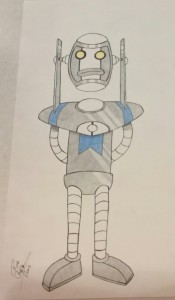 Here’s an idea of what I’m trying to go for with my android character. Well, one of them at least. This guy here is supposed to look like he would adhere to the rules and make all the expected logical decisions. However, I also did a few really basic sketches, which I will include below, and I kind of want to find something in between these two. Because then I would be able to draw the characters many times and it wouldn’t be a chore, while at the same time make the environments really stand out! I love drawing alien worlds and space and such, so I think keeping the main characters relatively simple in design could be a huge benefit in the end. Really though, these are just some very early random ideas. 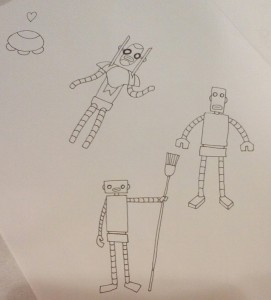 So, I’m going to answer the next two questions today from Crystal’s blog or …well honestly I can’t find where I got the questions from. It could of been from a newsletter, but I can’t seem to find the original email! Might of been one of her recent posts on her blog as well. Anyways, I’m glad I wrote them down!

What’s important to you?

Right away, I’m feeling that this is a pretty easy question to answer. I have so many people, friends and family alike, that support me the whole way. I swear, as soon as I make a new feature available, like donations or products to buy with my artwork on them, my supporters jump on the opportunity to help me out within a day or two. It’s fantastic to have so much motivation to produce quality content. It’s nice knowing there are people that will see it, and show their appreciation. I know that there have to be people out there doing something similar, you know, trying to do what they can to be creative, and they don’t get nearly enough support online. So, I guess I realize that I’m pretty lucky when it comes to that stuff.

What are you passionate about?

Another easy one! Or maybe I’m just in the mood to write today. I dunno. The first thing that pops into my head that I’m absolutely passionate about is technology. I’m talking, Star Trek Holodeck type stuff here! Hmmm… I guess I mean that more literally than I thought, as I’m going to specifically talk about one type of technology.

I was watching a Youtube video today where a girl was talking about the benefits of virtual reality. Studies were showing how being in a virtual world (you know, with the whole headset thing tricking your mind into thinking you’re somewhere else) would change how people would think. They did studies on putting people into bodies that were of a different ethnicity, and through some clever tests, they found that all of the subjects gained increased feelings of empathy. She explains it better than I can right now, but I think all the time about other benefits (like having wheelchair bound people walk or run in a virtual world) of virtual reality, but to be completely honest, I personally really just want to explore the universe. I want to go to fascinating places that don’t exist, or that would be completely impossible for me to visit.

That all being said, I don’t want this VR headset to make me feel isolated from the rest of the world. I want to be connected with the rest of the world through the Internet, and explore virtual worlds together. I really hope that, within the next 2, 5, or 10 years, that we really invest into this technology and find educational uses, as well the entertainment. Of course, entertainment will the focus right out of the gate, but what I’m trying to say is that I want to live out Ready Player One 😉