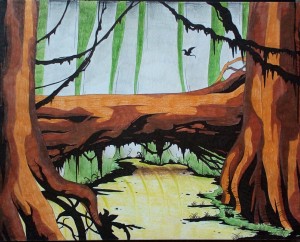 I’m starting to think that rather than calling this is a Star Wars drawing, I should use this (or something similar if I want to draw another one) as a location for my characters to visit in my imaginary comic book series. You know, those pictures I did awhile back. Anyways, I could potentially make it a Star Wars reference rather than an actual Star Wars location. I’m thinking that I could maybe have a little green Yoda-like creature giving advice to the main characters as an obvious reference. Hell, the story could be filled with all kinds of geeky references!

Okay, so speaking of my imaginary comic book idea, I had a dream last night. I want to make sure I talk about this before I forget and the idea disappears. Talking about it might also help keep me accountable to actually do something with this idea. Anyways, so I was thinking maybe I should go through with creating a web comic. I have whole bunch of interesting ideas about the whole comic book idea in general; like how to sell it, how big each issue will be, time frames, etc. But what I want to talk about today is my idea for the main characters; what about a web comic series centered around 3 androids who explore the galaxy Star Trek style?

Speaking of Star Trek, think about having a crew of three Data-like characters. Data was an android from Star Trek: The Next Generation, and he was without a doubt the most developed character on the series. He goes from being the traditional “straight as an arrow” android, to fiddling with new found emotions, dreams, and more or less trying to deal with his own existence and humanity. I say “humanity”, because in his case he was built by a human scientist, so he has lots of human characteristics. Anyways, my characters would be quite different, but they would deal with some similar themes. They also wouldn’t have a human-like appearance. Data even ends up owning a cat, that alone would be an interesting (and hopefully humorous) situation for one of the more eccentric characters to deal with. Well, maybe that’s not the best idea, but I haven’t thought through actual side-story plot details yet.

I was thinking of basing the characters off of the 90’s WB cartoon, Animaniacs. Yes, I’m quite serious. You’d have the down to earth (well, so to speak) and mostly logical android, the constantly malfunctioning and unpredictable android, and then the feminine info-heavy android. I’m thinking of making that last one a little sphere or hover-bot of some sort. Like the R2D2 of the adventure. Or maybe, if anyone remembers that robot from the Robin Williams movie, Flubber. No? Well never mind then. I don’t know! These are just some early ideas.

Am I crazy? Does any of this sound interesting to anyone? I’m feeling like this is something I definitely need to pursue and go all out on. Maybe I’ll dabble a little here and there with character building and some basic designs and such. Once my year of creative habits is over in August, I can go full force on building a first issue!