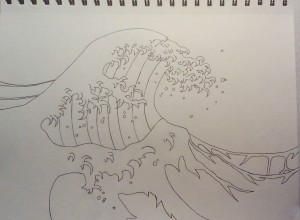 Today’s picture is a little dull, but hopefully you can see the potential for color. Though some of it will inevitably stay white, there will be plenty of blue when it’s finished! I’ve been finding all kinds of wonderful Japanese style water pictures using Google, and I want to draw them all! I’m not sure why I’m sticking with this style lately, but originally I was just going to make one, but then somebody recognized the style and they seemed to like it, so I thought, “Maybe others will too. I might keep it up for awhile.” I’m also learning lots of new stuff and probably once I’m finished with the current drawing I’m working on, I’ll start to make my own completely from scratch. While also adding in my own style more and more as I go along.

So, I hit a pretty big milestone on my Facebook fan page last night. I hit 100 page likes! Currently it’s sitting at 108. Pretty crazy, right? Seems the advertising money Facebook credited me with is really paying off. I mean, it’s a smart business decision on their part because advertising on Facebook obviously works. Once I’m out of that free credit, Facebook assumes that I’ll want to continue paying in order to get even more likes and post views. Clever there, Facebook. However, I was never interested in officially advertising with Facebook in order to gain followers. I was really hoping my fans would like, comment, and share my content instead, and that would be enough. There are a few dedicated fans that do it pretty regularly, but I’ve noticed that the number of viewers I get for each post steadily drops off. When I started out I had anywhere between 50-150 eyes on my posts, where now I’m lucky to hit 20 per post. I spent $6 of that credit money (Facebook gave me $40, I think it was) on a single post and it’s already hit 1,214 people! Ridiculous. The “post boost” hasn’t even ran it’s course yet! Though I understand what Facebook is doing, it certainly makes starting a business tough, eh? Apparently you gotta spend money to make money.

I’m so thankful for the support I get from my fans, friends, and family though. As far as art and creativity in general, without other people finding value in your work, there really isn’t a solid purpose to making it. It may sound crazy to say that, and it does seem so for me, at least. But, of course, when I build something creatively, it’s exciting and often challenging. I do find value in my own work, but the actual “artwork” (you can find excitement and challenges in many other non creative exercises) is only made for other people to consume. I want to make people feel something. So, in a round about way, I’m trying to say thanks to everyone that’s ever shared, commented on, or liked any of my posts! Getting those eyes on my content, I feel, is impossible without you.