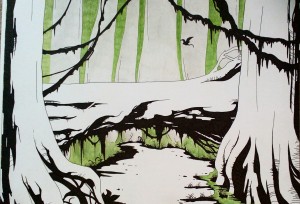 I’m still working on this old Dagobah picture 😉 Today, I added some more pen in some spots that I believe really needed it, and obviously I added a bit of color. The color is looking alright, though I realize now that I really do need one of these to help with smoothing out the colors. I’m also going to probably have to darken the grey between the green there in the background. I don’t think it’s showing up so great in photographs, but adding the darker grey will probably look better on paper too, so no real worries about changing something just for a photograph.

I’m a little disappointed at how the colored pencils look on this paper, when compared to the paper I used the other day for that little spaceship. That spaceship paper was expensive Stonehenge stuff. No matter which paper I use though, my artwork will still look a lot better than what I was doing before. Not to mention the colored pencils themselves are just perfect. They’re still sharpening really well, and they’re nice and vibrant. However, I’m noticing that there were no grays in the set! Kind of weird, eh? I guess I would rather have 34 proper colors, along with a white and black, then like 2 or 3 of those colors removed and instead have a couple gray variants. I don’t use grey all that often anyways. Oh! It did come with a silver pencil, which I used in that little spaceship the other day. Whenever I can make some money and decided to order more stuff, I’ll definitely pick up a couple grays to add to my collection. The gray I used today was a cheaper Prismacolor pencil I already owned. “Cheaper”, probably why it doesn’t show up as much as the green does!

I’m kind of looking forward to trying out the smoother side of this paper I’m using. On the back of this “Dagobah” picture is a side that feels a bit different. On the front of the sketchpad it states that there’s, “Two distinct bright white surfaces, one smooth and one textured.” So I’m interested in seeing how my pencils and pens look on that smoother side.

So, that’s about it as far as this drawing goes. The other thing I need to mention today is that I sold something on Redbubble! I’ve asked around a little bit and I don’t know who made the purchase. It was a throw pillow with one of my images on it. The painting I made that looks like it should maybe be on the cover of a horror novel. I know my mother actually really likes that piece, but she didn’t purchase it. So I’m not sure who did! I would love to know who and find out if it turns out alright. I really don’t know too much about Redbubble besides that it’s used by a lot of artists, and I heard good things here and there. But, of course, I’m very curious if the item quality is there and if the prices feel alright.

I made almost $3 for the sale, which isn’t bad at all. I won’t see any of it until I hit $20 though. I’m feeling that my goal should be to get a single purchase once per day. My mind is trying to be cautiously optimistic and that’s not how I usually think. If I want something bad enough, then I put the time and effort in and get it. I feel that way for most things. However, this really relies on what consumers want, and also brings in Redbubble as a third party. It’s not completely up to me to succeed. I wonder, how many users actually make a decent amount of money selling things in this manner ?