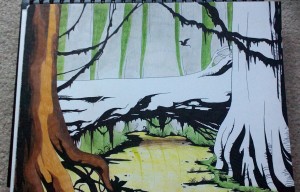 Oh man, I tell ya, the more I use these colored pencils on this paper the more I fall in love. I’m really starting to feel comfortable using these tools, and even though I’m still pretty early on in this drawing, everything looks marvelous so far! I still have to meld the colors a bit better on that tree though, because I’m noticing that the lightest color stands out a bit too much. It’s really nice to feel confident enough to know how I can easily fix that issue if I just apply myself.

That disgusting “water” there looks pretty good. I was attempting a ripple effect with those lines there, but I’ll work on that more tomorrow to hopefully get it looking even better. I’ll probably also begin coloring the large fallen tree in the center of the image tomorrow as well. So, doing the math, this should take me just two or three more days to complete.

I watched a movie last night called “Birdman”, I’m sure you’ve heard of it as I’ve been hearing a lot about it lately. I believe it’s up for several awards. It stars Michael Keaton and a whole other group of well-known actors and actresses. This movie was extremely impressive. This has got to be the most immersed I’ve ever felt in a movie’s story. I’m not going to talk about the actual story or spoil anything, as none of that is really what I want to talk about here. What I want to say though, is that I’m not really much of a movie fan in general. I’m in my early 30’s and I feel that I’ve seen it all. What I’m saying is that it’s very rare that I find a story that isn’t predictable. And predictable often means boring. Well, I don’t really watch movies expecting to be impressed, when I do watch them I hope to be surprised. Show me things that I would never have thought of on my own.

Birdman really got my brain going. It’s definitely one of the best movies I’ve ever seen, and I’ll likely watch it a second time sooner than later. Which is quite rare for me. I know I said I wasn’t going to talk about the story, and I’m not… technically, but I just want to say what I liked best about it. This movie reminded me of why I don’t usually enjoy movies. It has a fantastic moment where Michael Keaton’s character talks about (and vividly displays) how the art of telling stories has changed. We see the epic blockbuster, the theater, and the independent film. In contrast they’re, of course, very different. But they’re still just telling stories in the end. It’s like comparing a novel to a comic book. I find it rare that a movie like Birdman can successfully mix all my favorite elements together.

Anyways, Birdman surprised me. I heard that it was good, but I thought that was solely because of the unique directing style. However, this wasn’t the case. The directing was what immersed me in the story, but the characters are what wanted me to stay there. If you saw the movie, what did you think? If you haven’t, do you have any interest in seeing it? Why or why not?