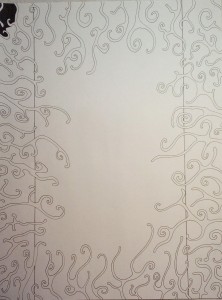 I figured it would be a good idea to post today’s drawing progress now, before I spend hours filling in half the image meticulously with black ink. You know, while I can still feel my hand. This is going to take awhile, but I’m actually excited about it! The last few days, after that swamp drawing, I’ve been feeling a bit… off. I think winter is finally getting to me as I haven’t been out much, and I’ve been very tired. I’ve found that I’m sleeping in later and later in the mornings, and I would even go so far as to say, if I look at myself in the third person, it would seem I’m a bit depressed.

Even when I sit back and realize that maybe I’m being impatient about everything (Hurry up Spring! Hurry up money! Hurry up feeling better about stuff and things!), I still feel like everything is moving entirely too slowly. I guess, when I’m feeling sluggish myself, it certainly doesn’t help any. Ah well, it’s January, no matter how I feel or what I do, the next few months will eventually end up behind me and I can perhaps look forward to something more positive. I miss being excited about stuff. You know, beautiful warm (dry!) days, having/making money, doing something new!

At least today I’ve felt a little better as I’m content with today’s drawing. Right away I started using my 0.05mm Micron pen (for the first time! that’s the smallest one I have). It felt pretty good! I didn’t plan anything out, I didn’t hesitate, I just started drawing. The left and right sides of the picture will have a black background, and I’m not sure what will be in the center yet. I’ve tossed around a few ideas while I was drawing the curved figures, but I haven’t settled on anything yet. Maybe there will be nothing in the middle!

Alright, question time! I have like 4 or 5 more questions to answer. Here’s two more for today:

How can you help people?

I guess I have inspired people to do some things before though. My nieces are pretty excellent artists themselves. They’ll probably be famous for their creativity a lot sooner than I’ll be! Oh, also… I remember my cousin Brad, who’s always commenting on my posts here, started a blog of his own several years ago after reading my old movies/TV/video game blog I used to have. He may have only wrote a couple posts, but he found motivation from me. Well, inspiration, I guess.

So, to summarize, I guess the best way I can help people is to inspire them. I would love for more people to make the decision to be creative, and if it’s because of something I did, I think that might be pretty cool.

Why are you taking on a year of creative habits?

Well, when I started reading Crystal Moody’s blog, I, myself, was inspired to take on the challenge, after going through most of my life unsure of the reasoning for why I’m even here. For most of my life I tried desperately to hold onto motivations for goals I cared nothing for. I saw what everyone else was doing, and I was told what I should be doing, and just went along with it because it was easy to follow along.

I felt the need to do something new and vastly different than how I’ve spent my time previously. “This Crystal chick wasn’t doing what was easy! She was trying to do something interesting.” She was promising a new piece of artwork, and a blog post, every single day. I put my time in drawing crazy creatures and such while I was growing up, and I had a blog for a few years too, so I could write decent enough! It was making too much sense for me to do this year of creative habits thing.

As I’ve mentioned, I used to be good at drawing, and spent most of my childhood and teen years drawing on whatever I could find. I figured it would be fun to see how much I’ve forgotten over time. So I dropped everything and make the decision to take this challenge full on. Hell, it’s not like I have any other obligations going on. And now I feel like I have a purpose. I really don’t know precisely what’s going to happen from here on out into my future, but it’s definitely going to be revolving around my creativity. This creative habit project will be the most important decision I’ve ever made.